Just the other day I said to Adam, "This year, on my winter break, I should be able to get a lot done on the house. Last year I was so focused on training and keeping Luna from freaking out over the other dogs getting too close to HER things and HER food and HER people that I didn't have time for anything else. She's so much better now. I'll be able to do things."

You may have already guessed: famous last words.

Adam sent me a picture a couple of weeks ago of a cute, cute, cute puppy in the liquor store. Customers bring their dogs in sometimes. "Who does that cutie belong to?" I asked.

"What are you doing with him?" I asked. 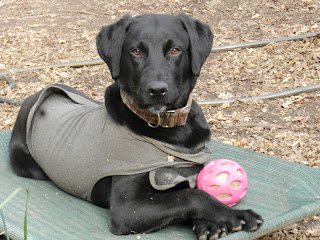 I have looked for an owner, I have tried to find a new home. I don't know if we'll find that home for him, but for now, he is here. After coming to us, he threw up 2 corn cobs and had to have surgery to remove a third that was lodged in his small intestines. On Christmas Eve. So now that we have spent some serious time worrying over him, it'll have to be a pretty damned perfect home. He's a good boy, but I am spending yet another winter break wrangling dogs. :\

That said, hopefully you will be seeing us tackle some of the list.

Here's hoping. There may be some other somewhat unrelated projects in the works. Just have to see how everything goes...
Posted by Amalie at 5:00 PM 2 comments: