It's been a while

I know. It's mainly because there's not been much to report. The winter doldrums, back ache (and the physical therapy that accompanies it), vacation planning, and a car crash all sort of put housework on the back burner. We are now almost one year out on the insurance claim from last year's hail storm; we have 2 years to complete so this summer will have to be a whirlwind of work. I suppose I'll update and then set some goals...

My back stayed bad for long enough that I've done a round of physical therapy. I have home exercises and little tricks that seem to be making things slowly better. Unfortunately, I didn't really stay on top of the home portion of the routine last week while we were in... 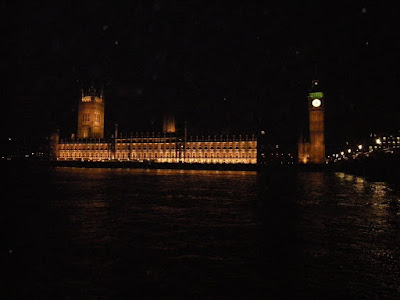 It was a great trip, the kiddo's first, Adam's second, and my too many to count. I lived there for about a year and a half, so it's always a bit of a homecoming for me. I just love it. We went to the Darwin and Picasso exhibits, Hampton Court, Windsor, Shakespeare's Globe, the Tower and lots of pubs and great restaurants. We managed to find a Holiday Inn Express for $49 a night through Hotwire; normally I love staying at local B&B type places. But they are a crapshoot, and we couldn't afford one that was fully en suite. So Holiday Inn did the trick. We had a great set of 2 for 1 coupons to most of the big stuff (Tower, Hampton, Globe, etc.). And a lot of restaurants have great kids menus or lunch deals.

We also did a couple of London Walks-- which I poopooed for years until I finally broke down and took the Jack the Ripper Walk they're so famous for. It was great; they're not hokey or boring. The guides are really knowledgeable. And at £7 per adult (kids free), it's the best deal in town.

We have a tradition of buying things from Portobello Road market; my in-laws brought home candlesticks, Adam and I got a sexton, I got a compass thingy, and now, on this trip, we got an antique walnut British mantle clock. I've been reading about them and how to make all the adjustments so that it keeps good time and chimes approximately correctly. It has the Westminster chimes and it is lovely. Pictures to come. 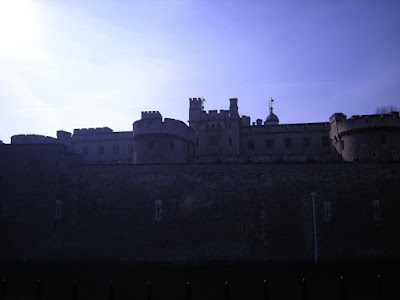 However, I did catch a nasty cold on the plane and spent one afternoon under the covers watching television (which frankly, was fine with me; I love TV there.) and I was nursing a sprained neck, to boot.

Yeah, that's whiplash. Whiplash sounds silly, though. Sprained neck sounds more correct. It's better now, but my shoulders still ache. See, a few days before we left for London, I was driving to work in the rain. Apparently, the temperature was a little lower between my house and work than I had anticipated. When I tried to change lanes on the interstate to avoid a wreck on one of the bridges, I hit ice and lost control of the car. I was the third accident there on that bridge. 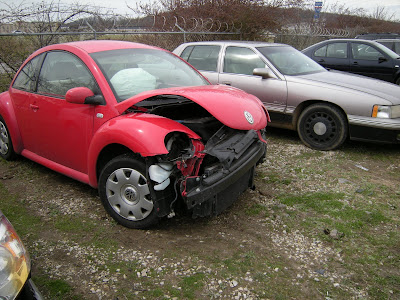 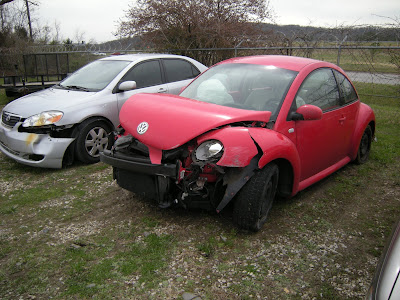 Goodbye Beetle. I will admit that I was not crazy about that car. I got roped into buying it brand new full price off the lot not even knowing how to drive it (it was a standard; I was young). So we started out a bit poorly as these were highly overpriced cars. Being German, they require a certain amount of higher-cost maintenance (special coolant, for example), and the inside was plasticky... Poor gas mileage considering hte size of the car. But I did learn to drive a stick on my own in that car, so we bonded a little. And I can say that it performed when it came to safety. It seriously performed. That was a highway speed crash into a concrete guard rail and that's it. The cabin remained mostly untouched. Way to position those crumple zones, German engineers. And thanks for the airbags. A bruised nose is a small price to pay.

So now I'm buying a new car. A Hyundai Elantra, I think. Lots of airbags. Lots of crumple zones. Great gas mileage. I want a stick shift, but I won't be picky. If the price is right, the car comes home with me.

Anyway, you can see that we've been a bit swamped since the new year. But we have to refocus on the house.

Those are the main things that need doing so we can wrap up the insurance and the inspections.