The Audacity of Neighbors

About 6 months ago, our neighbors across the alley stole our dumpy black trash can and replaced it with an even dumpier, dented, smaller black trash can. I decided to give them the benefit of the doubt and use the moment as an excuse to buy a new, nicer can with wheels. Life has gone on as usual.

Yesterday morning I went to take out the trash. I forgot to bring in the can a few days ago, so I carried the bag out to the alley. And there I saw that the neighbors have now taken the opportunity to upgrade to our new wheelie can-- and...wait for it...replace it with the first can that they stole. Wow. They stole one, waited for us to get a newer one, then stole the new one and replaced it with the first stolen can. So I took all their sticky garbage out of MY can and left it, open, in the alley, and took BOTH of my cans back. Then Adam told me I couldn't leave them with no trash cans. So I gave them the dented, dumpy, small changeling trash can they left for us the first time.

And then the garbage truck never came because sometimes they pick up on holidays and sometimes they don't. So my wheelie can is still at risk in the alley.

Sheesh. Simon really gets worked up over these neighbors because there's always cars coming in out of their driveway through the alley. He hates it.

Not a lot of work on the house going on-- my car was broken into last week, so I finally got the window replaced. We've been doing some cooking-- I have a recipe to post shortly. And the dog ate some cooked and splintered rib bones, so I was on poop watch for a while.

There was a skunk on the porch today. Eek!

Last you heard from me, I was preparing to fork over a few good holiday recipes and get a little housework done. And then my hard drive crashed. Fatal, nothing spinning, dead as a doornail hard drive crash. So yeah. It's up and running now, and I took lots of pictures in the meantime...

Baking Day
I had such high hopes for delivering these great recipes with step by step pictures. And I started out in the right vein.

Here's the sifted flour and butter/sugar for pecan butter balls-- those melt in your mouth powdered sugar covered cookies: 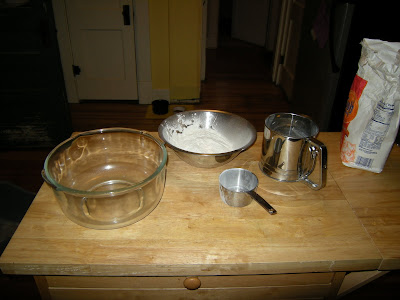 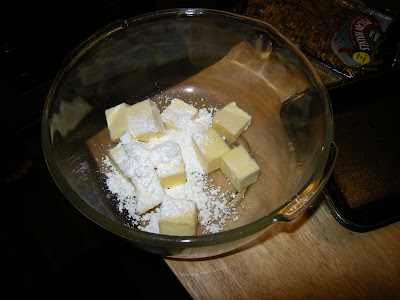 Here's the butter for 4 recipes worth of almond English toffee: 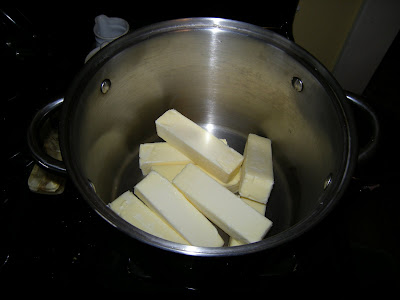 And the melting sugar and milk for candied pecans: 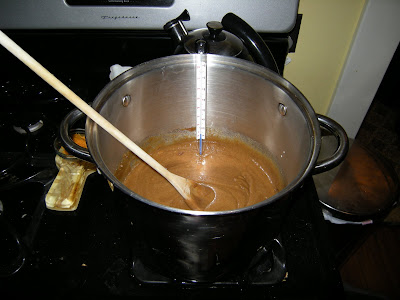 But then, before I knew it...Oops! All done! 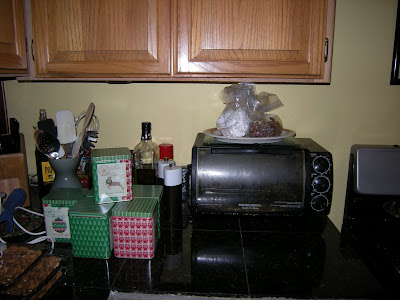 Bagged, canned and ready to go.

But I will still give you one recipe... 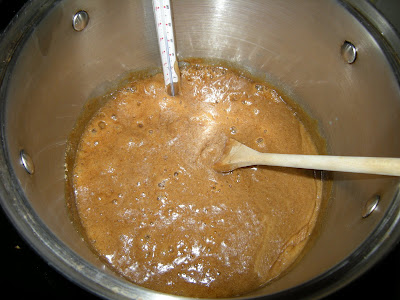 Once you've reached 234, turn off heat and stir in butter and orange zest. Add pecans and cranberries until coated. Pour out on wax paper. 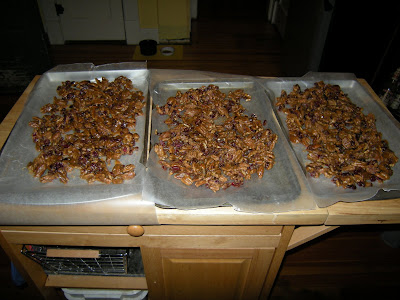 Once cooled, break pecan halves apart and bag. I ended up adding a little more than 2 cups of pecans and however many cranberries looked good. You can see that the above is more than one recipe. That's maybe 4? Anyway, easiest thing in the world and magical.

Holiday Business
The kiddo finally got to paint the ornaments I mentioned in the last post: 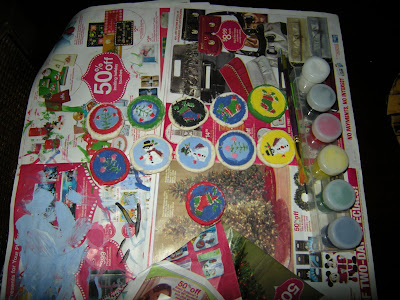 We hosted Christmas Eve dinner and munched on ham for several days of leftovers. For Christmas, Adam's folks got us a new toaster/convection oven. I'm loving it so far. And my mother got us an espresso machine. It's a much nicer one than I'd have ever bought for myself, and being a former Starbucks employee/Kool-Aid drinker, I've been having a great time fiddling with it and making fancy beverages. It's a wonder that with the DAILY whole milk lattes since Christmas morning I haven't gained 20 pounds. It was lovely.

For New Year we went to friend's house. She has a passel of kids so there was much Rock Band being played and much rum punch being imbibed. By the grownups, of course. Fizzy grape juice for the little ones and ummy yummy Ro-tel dip.

House Business
We did actually get a little done. I got a couple of coats of poly on the countertop trim and made a little progress on the remaining kitchen crown (one little fussy corner is giving me hell). I also started painting that hellish green window in the kitchen, at which point we made some decisions. The kitchen is being finished in alkyd paint. If we lived in a perfect world, I would do the trim throughout the house the same way. But there's circumstances beyond my control. First, I was told by two POs ago that they stripped most of the trim. It now only has one or two layers of paint on it. This was less than ten years ago, and they were living in the house. It's not a high gloss. I'm betting it's latex to begin with. Also, WE live in the house and alkyd is stinky and toxic. And finally, I would have to confine the cats for DAYS depending on the weather and I'm just not interested. We've already given the baseshoe a thin coat of alkyd, so I'll probably want to sand and prime with Zinsser 123 to make sure the latex will stick. Eh. I'm ok with it.

Adam got the garage cleaned and fairly organized, which was a feat of mega proportions and we got the basic box of the gable vent built: 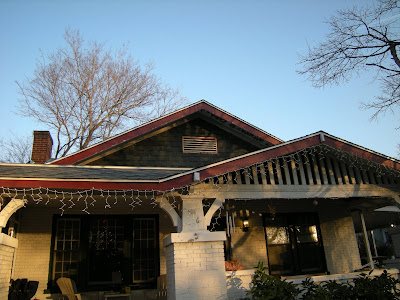 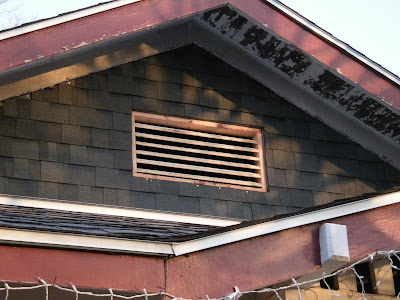 The slats are one more recycling of the garage door boards. And the 2X4s were salvaged from another project. We'll get it permanently set and then trim around it. First I want to paint it. This thing was a monster-- 42" across, and nobody makes a stock size that's horizontal like that.

That's the main stuff. Mostly, we sat on our butts or cleaned or baked. And going back to work is tough now. Really tough.
Posted by Amalie at 6:08 AM 5 comments: