Are you partial to Douglas or Fraser?

I'm partial to free, myself.

About 5 or 6 years ago we found that Lowe's always overstocks their trees and if we wait until the final days of Christmas, we get a beautiful, full, perfectly shaped beauty for $5-$15. This has worked for us, every year since, without fail. This year, we went to Lowe's on Saturday to find 6 scraggly FULL PRICE trees-- short trees that lacked a discernable top or bottom. We prepared ourselves for 2 outcomes: a very expensive tree or a the first fake one of my life. Wait, I take that back. There was one year where I had a 2 foot fiber optic rotating tabletop tree that changed color. I bought it at the grocery store.

Anyway, We found a lovely Fraser fir at Home Depot. It ran about $45-- the signs were stacked up on the ground, so we were hoping it was on sale, but we weren't holding our breath.

We looked around the store at a few other things, and when we got back to pay for it, the tree was freshly cut, stray branches were removed, the whole thing was bagged and ready to load...and then they sent us on our way, with pocketbooks none the lighter. They told us that employees get these trees for free, and sometimes they like to just give one away. We must have looked very pitiful, indeed. It was quite a Christmas miracle.

And it is a lovely, old-fashioned tree. 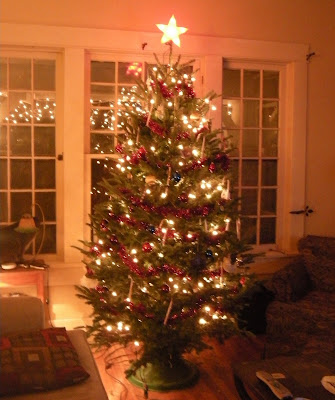 We completed the decorating this weekend and tried out a new pecan glaze recipe that I will absolutely share this week. The kiddo and I (mostly the kiddo) painted some salt dough ornaments we made several years ago-- I'll post pics of those as well. We found some holiday-themed cookie presses at an antique shop 2 years ago and made a bunch of the ornaments. Then my father was in the hospital, and last year was my family's first year without Dad, not to mention the fact that we were in a mad race to get moved into the house...Life got in the way. But they are ready for distribution this year.

Lots more to do-- we are hosting Christmas Eve dinner, as Thanksgiving was such a success, thanks to the dishwasher! This means a ham and all the trimmings to prepare. The blog may just go into recipe-only mode before this week is over!
Posted by Amalie at 6:42 AM 4 comments:

This is my grandmother's response every time I say Bing Crosby's name. Boy was he one hell of a whistler.

This is my favorite holiday movie. A Christmas Story is great, It's a Wonderful Life is a Classic, but this one has been so overshadowed by that showy Danny Kaye nightmare White Christmas. It always comes on in the middle of the night on a weekday when I can't watch. It's out on a special edition 3 disc DVD set now-- I've had it in my basket 3 times at the store this season, and yet I put it back on the shelf every time. It seems like such a frivolous waste of money. But I had a tooth pulled yesterday, so I'm going to make this a little Get Well present to myself, I think.

Not that I'll have much time to watch it over the break if we get everything done that we hope to. Which we won't. The To-Do list is always longer than what can be reasonably achieved. But it would be super nice to get the kitchen countertop trim installed and the kitchen window and door painted white to eliminate all traces of that awful green. Caulk the trim in there. We also need to fill in that ghost door. I would LOVE to have the hole in our ceiling patched. We'd also really like to build some basic bookshelves in the dining room below the buffet window sill. We have TEN boxes of books. 10. TEN. Ten boxes of homeless books.

And I still have holiday baking and ornament making left. And the Christmas tree! We've yet to buy a Christmas tree. So much left to do.

On a good note, I did get that red ribbon for the gas light while wandering around Walgreens filling my heavy duty painkiller prescription post-tooth-pull yesterday This makes the outdoor decorations complete.
Posted by Amalie at 6:13 AM 3 comments:

Well, we finally got a little bit of the holiday spirit going on in the house. Gingerbread... 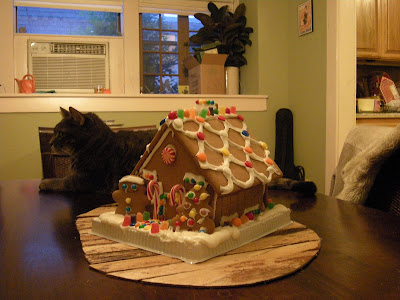 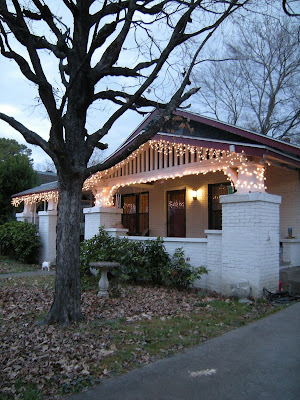 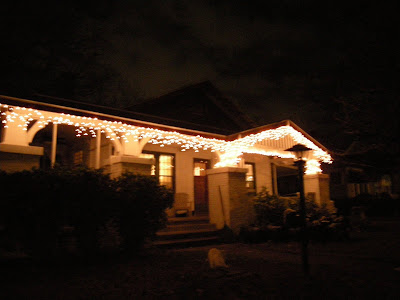 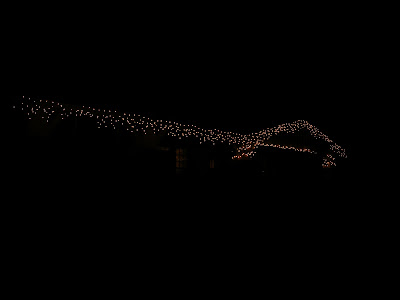 That last shot is with a high shutter speed. I just thought it was kinda sweet. I also think that gas light in the front is just screaming for a big red bow. Maybe I'll get to it yet this year. The previous owners had nails all along the eaves, so we can't claim this one for ourselves completely, but it has made me disproportionately happy. My dad only did lights about twice the whole time I was growing up. This is a long time coming.

Adam got a ton of raking done over the weekend and the kiddo and I got the patio cleaned up ahead of a winter storm they're predicting may come through here. Great timing, considering I really need to get to my dentist tomorrow-- an hour away. I had a crown fall off over Thanksgiving, and we decided I should just get a bridge. apparently the crown's been loose for a while. But I decided to wait until the first of the year so I can use flex health savings account dollars. Then the crown fell off again this weekend and won't stay on at all. Sigh.

Good news is 2 weeks off of work coming right up. I may be half toothless for the holidays, but I will be watching daytime TV. Last year I was refinishing the floors and drywalling the kitchen. this year? Oprah. Tyra. Days of Our Lives.

This is gonna be the Best Christmas Ever.
Posted by Amalie at 7:42 PM 8 comments:

Or, you know...Best Garage Doors This Sad Little Shack Has Ever Seen.

The kiddo and I scraped, sanded and primed the new barn-style garage doors. Actually, I wet scraped and then quickly sanded with my super duper respirator on, just in case the paint was lead-based. Then the kiddo helped me prime. Next weekend? Real paint.

When we were through, I was a little disappointed that they didn't look brand-spanking new. But the more I looked at the doors, the more I decided that this was a good thing; they look like they've always been there, and at least half of them always have. I would much rather save much of the wood and a little money than spend more and waste material on doors that would look a suspiciously good for their location.

They are sturdy and functional and not an eyesore. And really, that's all that matters. 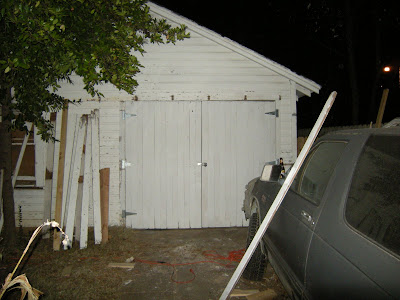 I give thanks for new garage doors

Yay! Here is the before, as it looked after the hail storm: 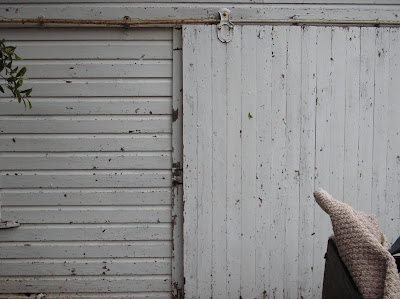 So you can see that this is one of the old fashioned sliding doors. You can probably also see that the rod/track is bent and rusty. I've been unable to move the door by myself for a while now. For one, the door dips down in that bent part and starts to drag on the ground; it's too heavy for me to lift up and move along. Also, there are places where the bolts holding the track up have rusted and/or rotted out of the building. The wheels on the door then snag on the loosened brackets. If I got a running start, sometimes I could get past these two hiccups, but usually one of the wheels fell off the track altogether and caused a whole other host of problems.

Recently, the track gave way completely and the door was pretty precariously leaning on the frame. The final straw was a windstorm that blew the door down and onto the car parked in front of it.

The hailstorm insurance settlement included money to repair this door-- reset the track and replace most of the wood. We decided a new door system was a better use of the money. The end result: 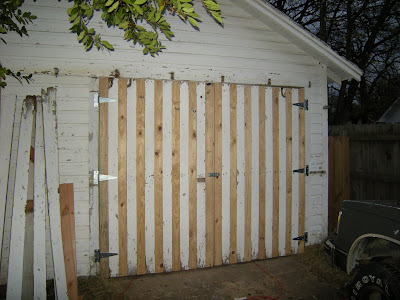 Tada! Obviously still needs to be painted, hence the candy stripe effect. It just seemed such a waste to buy all new wood when at least a portion of what was there was perfectly good. We broke down the big sliding door and salvaged about a dozen of the most intact of the 1X5 tounge and groove boards. Then we ran them through the table saw to take off the tongue and chopped off the ends. Then we alternated them with 1X4s on a frame of 2X4s. Added a few 2X4 bracings for the hinges and slapped those puppies up. 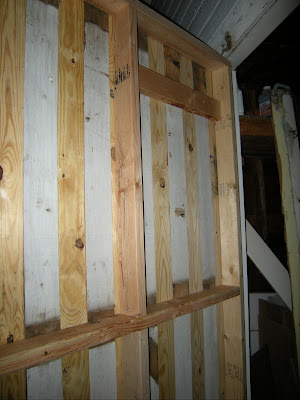 It took many, many trips to the hardware store, which officially makes it a project in my opinion. We still need to add diagonal support cables to the inside to reduce the inevitable sagging, and some scraping and painting will top it off. But it made me seriously so happy.

We also had the heater looked at on Wednesday...the guy who came couldn't find the smell, but suggested that the hallway where the return vent is located might be creating a negative pressure situation and sucking air up through the patched floor furnace hole. The vapor barrier under there is pretty ragged and not really working well anymore. Add that to the list.

And then we cooked and cleaned for Thanksgiving. It was a great excuse to get the house cleaned up and usable and a really great excuse to have a whole lotta leftovers for a very long time.

(I should add a disclaimer here that, while the kiddo and I did most of the cooking and cleaning, Adam did most of the work on the doors. I did a lot of holding, going to the hardware store, replacing spent batteries with charged ones, catching boards on the other side of the table saw, and helpfully pointing out when we were screwing things into the wrong end. Adam deserves most of the credit on this one.)
Posted by Amalie at 6:36 AM 3 comments: